Saturday: We rake the leaves, start putting things away, tying things down. B is in and out of the basement, stowing stuff, idk. He's making a bigger deal of this than I think is warranted. We watch a lot of the weather channel.

Sunday: No cat this morning. I say, "She knows when a storm is coming. She goes somewhere." B says, "If it were really stormy out there, we could keep her inside." "How would you do that?" "When I feed her on the back porch, I have it so she'll come in with the door open just a little bit, even if I'm sitting right there. I'd get her to come in and eat, and while she's not looking, use a broom handle to shut the door." "She'd flip out." "Yeah, but she'd be safe from the storm."
Do all the laundry, bungee cord the 1000-lb cat house down, bring all the tools into the house, etc. idk.

Monday: It's kind of windy. A little rain. I work, B watches the news, which is all weather, all the time. He fills the bathtub with water (for drinking). Gym closes at 1pm. Emergency announcement calls from the mayor say schools are closed. No ballet.

Tuesday: That's about it. No sign of the cat. I slept through yoga, which didn't happen anyway, but the gym was open. A little rain still, and lots of media coverage. Reading in bed that night, I hear noises, like someone's in the house, but of course nobody is. We even do a cursory tour of the basement. B says, "Turn on the TV." No more noises.

Wednesday: Back to normal, but still no sign of the cat. Starting to get worried. Gym, work, etc. Halloween! We turn out the lights to avoid children, and I'm working with music on. Between songs, I hear what sounds like a meow in the hallway. But it could have been a squeaky door. More noises. The lights are out, it's Halloween, and there are strange noises coming from inside the house. B makes fun of me, but he hears them too.

Thursday: Working again, that's definitely a meow I hear. I inspect the basement, sniffing, and notice a faint eau of cat poop. Looking down, directly under my nose and on my turtle rug, a pile of cat poop. Cat must be hiding. And hungry. I put out a bowl of food at the bottom of the basement stairs and a few minutes later hear eating noises. It's HuntsBad! And she's hungry. When she had finished, I opened the hatchway and let her out, then cleaned off the rug. She's now frolicking in the backyard. 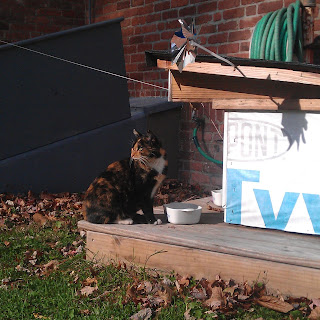